“Agriculture is going to have to look different,” says Lincoln Fishman of Sawyer Farm in Worthington, given the climate crisis. “And I’m just not interested in farming the old way.”

Well-read and well-spoken, Fishman has a keen ability to look beyond his own farm to see the trajectory of commercial farming as a whole, and to consider his role in shifting that. He sees climate change as a grave threat and is unabashed in his willingness to adapt dramatically and to help other farmers do the same. 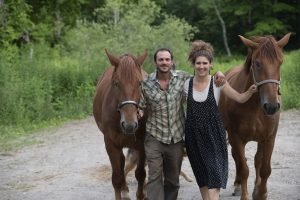 Lincoln Fishman and Hillary Costa of Sawyer Farm with their beloved horses, since given up as they transition how they farm (PC Scott Streble)

At Sawyer Farm, Fishman farms 25 acres of sloping Hilltown fields alongside his partner, Hillary Costa, and a handful of colleagues. “About seven acres are in vegetables and cover crops,” he says, “focusing on crops that can be stored and sold year-round – cabbage, carrots, onions, that kind of thing.”

Much of their produce is sold at an onsite farm store at the end of Sawyer Road, which also carries food from other local farms and handpicked staples sourced as ethically as they can manage. They sell wholesale to other markets, distributors, and restaurants too.

Farmers have a firsthand view of changing weather patterns in New England, and their observations often humanize the scientific data showing how climate change is fueling these trends. 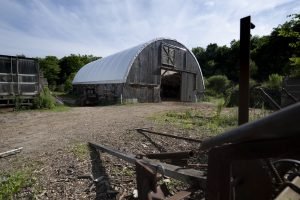 “I’ve farmed here for 12 years and 15 in total, and I’d say the last five have felt dramatic,” says Fishman. “For us it’s all about the intensity and frequency of precipitation, and the variation is stunning. Last July we had 16 inches of rain, this July we had one inch. We can’t predict anything.”

How that rain falls also matters, especially since Sawyer Farm’s fields are sloped. “We’re seeing more intense rain falling in shorter periods of time, which can cause all kinds of soil erosion,” he explains. “My kids won’t be able to farm here unless I’m very careful in preventing that.”

Even when a farm identifies their vulnerabilities, as Sawyer Farm has with managing water and protecting soil, the specific impacts they face evolve as climate change progresses. This forces farmers to adapt and re-adapt to stay ahead of the curve.

“Five years ago, we thought we could count on crazy rain during the late summer hurricane season,” Fishman says. This threatened to wash away precious topsoil. One way to prevent that is to plant a cover crop whose roots hold soil in place, which they usually did in fall once cash crops were harvested. 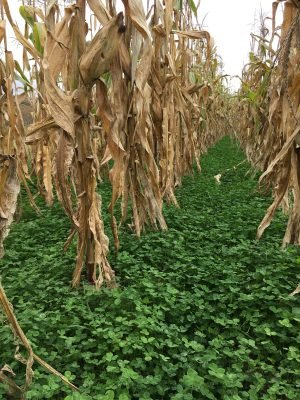 Field corn ready for harvest, with a cover crop of clover below.

“To adapt, we started planting a cover crop of clover underneath everything in July,” says Fishman. “By hurricane season it formed a full mat, and we reduced our fall soil erosion to near zero.”

That solved one issue, but like a game of climate-fueled whack-a-mole, more appeared.

“Then we started getting intense spring rains around the time we normally tilled, when the soil was soft and washed away easily,” he explains.

They realized they needed year-round soil coverage and using a living cover crop of clover remained the most feasible method. But to keep that clover alive year-to-year meant not tilling the soil.

Tilling serves many functions in modern agriculture, from killing weeds to turning in cover crops and preparing beds for planting. You can also accomplish these goals without tilling, and farmers are increasingly turning to low- or no-till methods. This can make soil more resilient to several climate impacts, aerating it and improving its capacity to retain water, and maybe sequestering more greenhouse gasses from the atmosphere, though the science is complex. 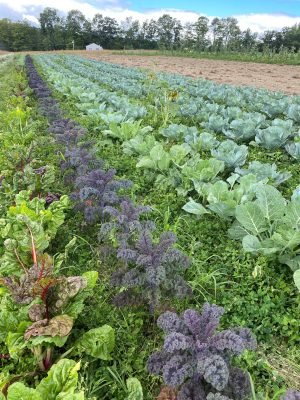 There are many ways to do low-till farming, but most at a larger scale rely on chemicals to kill weeds. Fishman’s goal was to grow organically and encourage his crops to coexist with one chosen “weed” – clover.

That might sound simple, but Fishman’s inability to find other farms using this technique signaled its difficulty. From the timing of planting to the tools they’d use, a lot would have to change. Most noticeably, they’d no longer need their beloved team of draft horses, whose main job had been tilling. Without blueprints to follow, they drew their own.

Sawyer Farm is now three years into their experiment of planting veggies into fields of clover. To begin the process, first seedlings are planted into bare soil. Once the crops are established, clover is sown underneath them in July.

“By the end of August when we harvest, I’m walking in a fully established field of clover,” explains Fishman. “That clover then overwinters, and for the next few years we keep planting into established clover.” 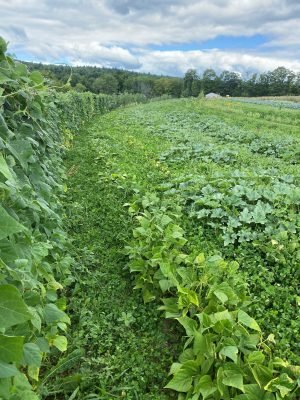 Each season surfaces new challenges. The main task is making sure the clover outcompetes weeds but not their crops, a balance they’re still tuning. Eventually weeds do infiltrate, requiring them to till and begin the cycle anew. But if that happens every four years as Fishman predicts, they’ve still reduced tillage four-fold.

This way of farming they’re piloting is unproven. Will the soil be healthier? Will it grow as much food? Will it be financially viable enough for other farmers to follow their lead? Fishman isn’t sure. But he’s gathering data and offering his farm as a laboratory.

“We just received a SARE (Sustainable Agriculture Research and Education) Partnership Grant that will fund me to work with another farmer and a PhD student at UMass and American Farmland Trust to study all of that,” he explains. “I think farmer-driven research is the best way we can innovate in agriculture, because that’s what’s most compelling to other farmers.”

Thinking big comes naturally to Fishman, who’s focused on ideas that can be scaled up or replicated by other farmers. In his eyes, three obstacles are impeding more of that kind of innovation. 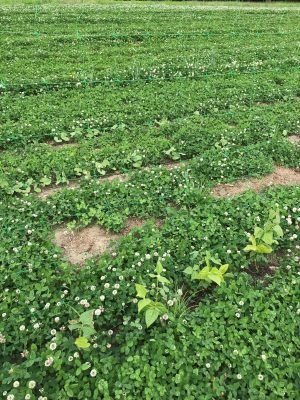 Climbing beans get their start, recently planted into an established field of clover (PC Sawyer Farm)

The first is the lack of existing research on alternative farming methods. “We really don’t know how to proceed right now if we want to feed people sustainably,” he says. “There just aren’t many examples.”

Then there’s the lack of connectivity among farmers for sharing what information does exist.

“I don’t know how it is in other fields,” Fishman says, “but it must not be this difficult. When I try to research a new idea or piece of equipment, that knowledge is scattered in a hundred people’s brains, and they’re not talking to each other.”

Farmers are busy and hard-pressed to maintain knowledge-sharing networks on their own, though some do. Farm support organizations like Community Involved in Sustaining Agriculture (CISA), the Northeast Organic Farming Association’s Massachusetts Chapter (NOFA/Mass), and UMass Extension all facilitate this to some degree.

Yet by and large, Fishman contends, the best-funded institutions that aid farmers, like land grant universities and state and federal departments of agriculture, seem not to prioritize farmer-to-farmer information exchange. UMass Extension’s budget and staffing in particular have been reduced dramatically over many decades, diminishing their ability to support this. 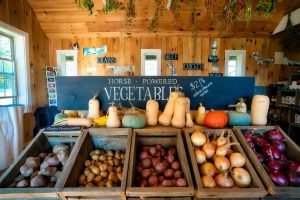 This points directly to the third impediment Fishman sees: a lack of public funding for farming innovation and climate adaptation, which he and many others argue is a public good.

“With the exception of the SARE grant, I don’t get compensated for the experimenting I’m doing,” he says, “and I could have gotten much more profit out of these fields if I wasn’t experimenting.”

Grant programs do exist to compensate farmers for conserving resources and shoring up the local food supply, and Sawyer Farm has taken advantage of several. From the state, they used a Massachusetts Department of Agriculture Farm Viability Grant to help build their farm store, and Food Security Infrastructure Grants to build more cold storage and purchase tractor equipment. Federally, they’ve received funding from the Natural Resource Conservation Service for things like invasive plant removal and manure management.

But while those programs do help farmers protect the environment while keeping their business in the black, they represent a fraction of total public spending on agriculture, most of which supports the continued farming of commodity crops. Very little is spent on innovation.

Massachusetts’ Food Security Infrastructure Grant program was a step towards funding farmers to find solutions. Prompted by supply shortages at the onset of COVID-19, it put resources in farmers’ and small business owners’ hands to fix the supply chain gaps they experienced daily while trying to connect local eaters to their food. This funding was short lived, however, and despite its success state interest in this investment has ebbed. 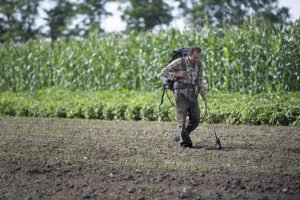 Whether for food security or sustainability, “to pay out of my own pocket to innovate doesn’t account for the broader social benefit it has,” Fishman says. “What I’m doing is absolutely the wrong way to do business. I just think it’s the right way to farm.”

“There needs to be more financial incentive for expanding knowledge around what farming should look like,” he continues. “That would be using public funds to benefit the public.”

Regarding his own experiment, it’s not much of a stretch to say that Fishman has bet the farm on it.

“If this fails, I don’t know what I’ll do,” he says. “Nothing would convince me to go back to tilling every year. That would feel like going backwards. I’d rather help other farmers move forwards from wherever they are.”

Jacob Nelson is Communications Coordinator for CISA (Community Involved in Sustaining Agriculture). As a frontline supporter of local food and farms in western Massachusetts, CISA helps farmers get the help and funding they need to thrive, even amid challenges like climate change. Learn more at buylocalfood.org