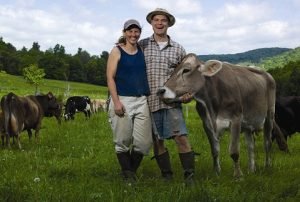 What do you do when you have a four-quart-a-week yogurt habit? Buy some cows, of course. That’s what Klippenstein and Lacinski did in 2006. They’d been growing organic vegetables on their farm since 2001, first for themselves and then for sale, but saw a gap in the availability of locally produced organic yogurt and decided to fill it themselves.

As a small-scale organic farm, Sidehill is committed to stewardship of the land and to producing high-quality food in balance with nature. “Our mission is to address the issue of health on a holistic level,” says Klippenstein. “The health of the soil, the animals, the economy, and the community.”

They now own 17 cows grazed on certified organic pastureland, producing raw milk and yogurt from March to December. And they continue to grow and sell over 30 different organic vegetables, including greenhouse tomatoes, summer heirloom tomatoes, and nearly year-round salad greens.