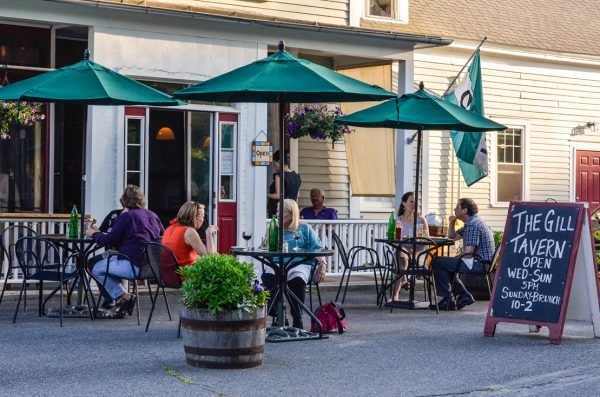 The Gill Tavern is the kind of place where foragers can stop by to share mushrooms they’ve found, and local farmers and diners trade ideas with the staff about how to present the fresh fruits and vegetables of the season. Chef Jordan Scott welcomes these informal exchanges and owner Laura Carboni feels the same way. “We want our restaurant to be a place for local communities to gather, a place for people to connect.” With this in mind, Jordan, Laura, and Chris Pietras, Laura’s husband and co-owner, pay close attention to the tavern’s impact on the community on both a small and large scale. From supporting local farms and businesses to reducing water use, they strive to encourage community health and sustainability with every choice they make.

The Gill Tavern’s position in the community reflects its roots. For many years, the building housed the Gill General Store. General stores are historically places for people in towns like Gill to meet and greet each other, and like many small town general stores Gill’s was in need of some revamping when Alden Booth and Lissa Greenough, the owners of The People’s Pint, bought it 7 or 8 years ago. According to Laura, Alden and Lissa’s hopes for the business were dashed when local road construction rerouted traffic away from the store. Yet, despite the dwindling customer base, the store was still doing well with its small sandwich business. Seeing this unfortunate chain of events as a new opportunity, Alden and Lissa transformed The Gill General Store into a restaurant. The Gill Tavern officially opened in 2008.

For Laura and her husband Chris, who bought the restaurant from Alden this February, the restaurant has been an expansion of the way their own lives have developed over the years. The couple moved to Gill from Brooklyn 12 years ago, with the goal of living in a place where they could grow more of their own food. Now they grow food not only for themselves, but also for the restaurant. The tavern serves tomatoes, squash, kale, collards, cucumbers, lettuce, radishes and berries grown at Laura and Chris’ house. In addition to this, the restaurant works with many local farms and distributors to provide vegetables, meats, and dairy products. 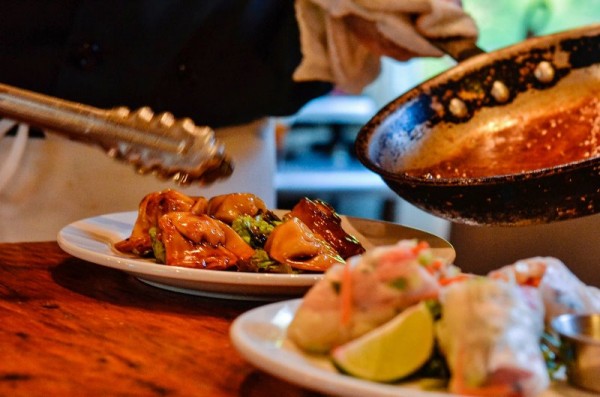 Working with local foods is a vital aspect of the restaurant’s focus on sustainability. Jordan shares this telling example of how hard the restaurant works to operate sustainably. “This past November, I bought a roll of plastic wrap. It is the second roll of plastic wrap I have bought since the restaurant opened.” In addition to relying on reducing plastic use, the restaurant composts all organic material, uses environmentally sound cleaning supplies, and has a solar hot water heater. They also pay close attention to water and electricity use, analyzing the impact of every step in all their daily tasks to find new ways to reduce their use of resources. “It all adds up,” says Laura.

Speaking as a chef, Jordan describes cooking with what’s in season as “an interesting process. We have to roll with the punches. For instance, last week, the garden produced 50 cucumbers in two days and I had to figure out what to do with them.” One look at the tavern’s “Root to Fruit menu,” which is being offered for the start of Restaurant Days on Tuesday, August 20th, reveals just how creative and delicious Jordan’s results can be. While the basic ingredients for the seven course dinner can be found on CISA’s and the tavern’s website, Jordan is keeping the details of the menu to himself and the restaurant staff. “We want it to be a little bit of surprise,” he explains. Interested diners will have to go to the tavern to discover how Jordan plans to make a tartare out of watermelon and ice cream out of sweet corn.

Jordan admits that he originally saw the restaurant’s sustainability model and focus on local foods “as a selling point, not so much of a philosophy. “ But, he says, “Now this is a really big part of my life. It is incredibly important to me.” In contrast, Laura, who started working in restaurants with this philosophy firmly in place, saw the opportunity to work at The Gill Tavern as a perfect way to bring the pieces of her and Chris’ life together. But no matter what your vantage point, once you stop by to enjoy an amazing meal at The Gill Tavern, you are sure to come back again for more. Their passion is contagious.