The Trustees of Reservations

“We love the outdoors. We love the distinctive charms of Massachusetts. And we believe in celebrating and protecting them – forever, for everyone.”

These words greet visitors to the website of The Trustees of Reservations (The Trustees), the oldest conservation organization in Massachusetts. Since its founding more than 100 years ago, The Trustees have been “preserving for public use and enjoyment properties of exceptional scenic, historic, and ecological value in Massachusetts and working to protect special places across the state.”

The term “reservation” has resonated with the public since the time of The Trustees’ inception. In a letter published in the March 5, 1890, issue of Garden and Forest, Boston landscape architect Charles Eliot referred to reservations in proposing that natural and cultural landscapes be preserved, improved, and made accessible to the public. At a time when farmland and open space were rapidly disappearing due to industrialization and urban growth, Eliot’s letter led to The Trustees’ founding in 1891 as the first private non-profit conservation organization of its kind in the United States.

With more than 40,000 members, The Trustees care for 110 properties, comprising more than 26,000 acres, and monitor 285 Conservation Restrictions that protect another 20,000 acres. Unlike the land trusts in this series of profiles, The Trustees’ mission includes protecting historic houses and cultural and ecological resources. In western Massachusetts, The Trustees are known for their stewardship of such natural treasures as the Chesterfield Gorge and Ashfield’s Chapel Brook, as well as the William Cullen Bryant Homestead in Cummington and Naumkeag, the 19th-century masterpiece of architectural and landscape design built by Joseph Choate in Stockbridge.

Farmland preservation has been an important priority for The Trustees since before the formal Agricultural Preservation Restriction (APR) program was created in the 1980s. An early APR project of The Trustees was the protection of agricultural land at Warner Farm, a Local Hero farm, one of the oldest working farms in New England (1720), which also operates the famous Mike’s Maze in Sunderland.

Through its affiliation with Hilltown Land Trust, The Trustees protect working landscapes in the highlands of western Massachusetts, including hilltown farms, sugarbush, and forested land, all of which are integral to the local economy and quality of life. 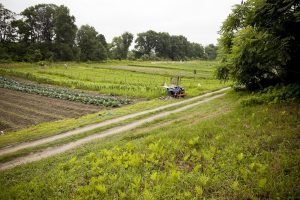 The Land of Providence, Nuestras Raíces farm (The Trustees photo)

The Land of Providence, 25 acres along the Connecticut River between downtown Holyoke and the Massachusetts Turnpike, provides farmland to Trustees partner Nuestras Raíces (“Our Roots”), a Local Hero member and non-profit organization that promotes urban agriculture and provides opportunities for Latino and other immigrant communities in Holyoke to grow fresh food and raise livestock. Donated to The Trustees in 2009 by the Sisters of Providence, this fertile oasis offers visitors the chance to wander riverside paths through the floodplain forest, picnic next to the Connecticut River, and appreciate the busy activity of a community farm. 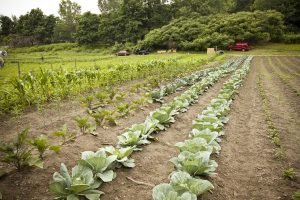 The Land of Providence, Nuestras Raíces farm (The Trustees photo)

Joanna Ballantine, The Trustees’ Western Massachusetts Regional Director, notes that properties like the Land of Providence provide opportunities for people to make connections with local healthy food, the land itself, and the beauty of agricultural landscapes. In 2012, The Trustees hosted 175 programs at their farms across the state – from festivals to 4-H events – that engaged nearly 11,000 participants.

Ballantine adds that involving the public in sustainable agriculture and the local food movement is essential to farmland preservation efforts. The Trustees are working with other land conservation organizations to raise public awareness of the urgency of protecting agricultural land, in order to ensure that the Valley’s valuable farmland is preserved for current and future generations.

For a wealth of information including details about each Trustees property, visit www.thetrustees.org.