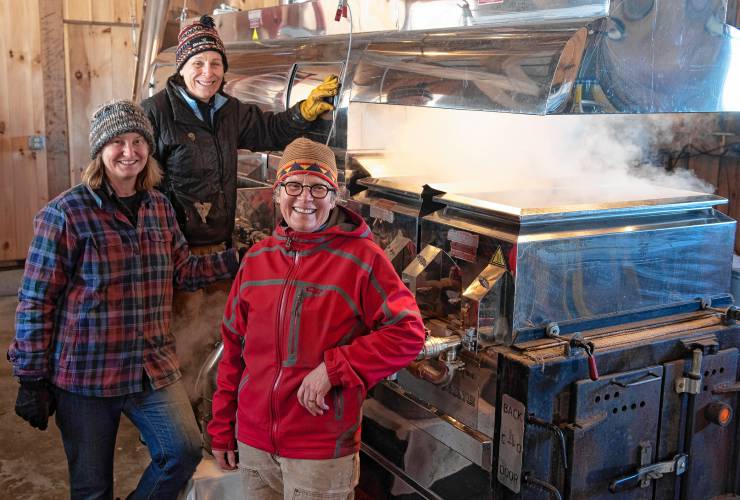 WORTHINGTON — Taking over a farm during a global pandemic may not be for everyone, but that’s exactly what spouses Kelly Auer and Deb Rocque did, alongside their friend Kim Trust, when they purchased Justamere Tree Farm in 2020.

Since then, the three owners have taken advantage of the turnkey nature of the decades-old Worthington maple farm to continue to produce maple syrup and other maple products, and they have big plans for the operation going forward.

“We’ve always talked about owning a farm,” Trust said. “It happened way earlier than any of us thought it would.”

Trust said she has been friends with Auer and Rocque since 2004, when she met the couple while all three of them were living in Alaska. In 2019, the future farmers watched the film “The Biggest Little Farm,” and Auer and Rocque were inspired to look for farms in the area.

They saw that Justamere was for sale and fell in love with it, causing Trust to fly out from Portland, Oregon, to take a look at the place. Trust also fell for Justamere and the three of them purchased the Patterson Road business in the spring of 2020.

“I love it. I absolutely love it,” said Auer, on being a farmer.

Justamere was previously owned by J.P. and Marian Welch, who founded the farm and sold it after more than 38 years of owning and operating it.

Auer and Rocque met in 1994 when Auer was a graduate student at the University of Massachusetts Amherst, which she attended from 1989 to 1994. The couple subsequently moved to the Pioneer Valley in 2012.

Trust, meanwhile, moved to the area from Portland to farm Justamere with Auer and Rocque, taking early retirement from the U.S. Fish and Wildlife Service to do so.

Trust said that 5,000 maple trees are tapped at Justamere yearly, which translates into about 2,000 gallons of maple syrup a year, although last year was a slow year for the maple business as a whole, with the farm producing only about 1,500 gallons. This year promises to be more productive, Trust said, with sugaring production off to a strong start with a “really nice early run.”

The farm started tapping trees Feb. 1, and the sap produced is run through a reverse osmosis machine that removes about 90% of the water from the sap, creating a concentrate. The farm then uses a massive evaporator to produce maple syrup from the concentrate, with the machine regularly fueled by wood thrown into the blazing fire that powers it.

The maple syrup produced at Justamere isn’t just sold as syrup. The farm has a commercial kitchen on site, where products that include granola, maple seasoning, pancake mix, maple hot cocoa mix, maple sugar, maple cream and maple candy are all produced. The maple syrup and the other maple products are sold by Justamere online as well as at local farmers markets.

She also spoke about the farm allowing the owners to work outside, and that even though the work is physically demanding “we’re taking this on and making it work.”

Additionally, Rocque said that she likes being a part of the small farm and small business community.

One of the workers on the farm is Jacob McCowan, who recently graduated with a degree in agriculture from Berea College in Kentucky. This is also his first time in the Northeast.

McCowan learned about the farm from Abby Brownell, who is in her third season of working at Justamere, having done her first season when the Welches owned the farm.

“(The) transition was awesome,” Brownell said, who noted that she got to meet the new owners when they were in the process of buying the farm.

For the future, Trust said that they’re interested in expanding the number of trees that they tap and bringing farm animals back onto the land.

Auer said that none of the three owners have children, and she said they are interested in turning the land over to people of color when they retire from the business. Auer also spoke about transforming the farm into a nonprofit to bring people of color into agriculture.

Rocque noted that she’s had a career in conservation work, and spoke to the importance of getting people out on the land. She also said that a big issue for farmers starting out, particularly from underrepresented groups, is getting land to farm, and that when a nonprofit is set up, non-maple farming might also be brought to Justamere. However, she said that the nonprofit is still years away.