“It’s basically like a landslide,” Amelia Mead says of tilling the soil. It resets the soil ecosystem to a state of just-post-disaster – a blank canvas on which crops and weeds fight for control. Meanwhile underground, dazed soil organisms begin rebuilding their complex habitat that was just shaken like an Etch-a-Sketch.

“By not tilling,” she continues, “we’re trying to create something like a forest soil, more layered and diverse. We’ll never fully achieve that while growing annual veggies, but we can get closer.”

Mead is co-manager, along with Ellen Drews, of Astarte Farm in Hadley. On just over three acres, they’re experimenting with how to grow maximally on a small piece of land without tilling or using chemicals. 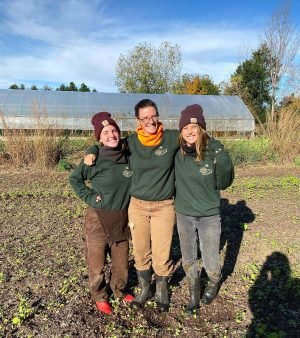 “All these things make it more challenging to grow vegetables than with more conventional farming,” offers Drews. “But we think it’s worth it, and we can taste the difference in the food.”

Astarte has been part of Mead’s life for a while. “The farm was started by Dan Pratt,” she explains. “My family bought it in 2014, and I really started getting involved three years ago.” Drews came on soon after.

“For a while we were just a wholesale farm,” Mead continues. “Our main customers still are the River Valley Co-ops in Northampton and Easthampton. We also sell to some great restaurants like Daily Operation in Easthampton, Homestead in Northampton, and the Humble Peach, which just opened in Amherst.”

Last year they started offering Community Supported Agriculture (CSA) shares, where people pay up front for season-long subscriptions to the farm’s produce. One reason to market directly to eaters was the slowdown of restaurant sales in the first year of COVID.

“But really,” says Drews, “we thought face-to-face interaction with people would be a good chance to explain how we grow our food, and why it’s unique. There’s a lot of benefits to no-till farming that we weren’t getting to talk to consumers about.”

There are many reasons why tilling, plowing, turning, or otherwise disrupting soil is an effective strategy for farming. These practices remove weeds, turn in cover crops, and aerate and prepare beds for planting. With the proliferation of tools attached to teams of draft horses and later tractors, farmers have done this with ever greater efficiency. Tilling has helped them grow more food. There are also some major drawbacks.

“The big thing is that you’re breaking up the structure of your soil,” Mead explains. 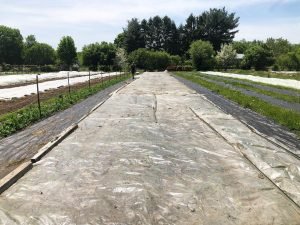 Astarte Farm in Hadley doesn’t till the soil, instead using other techniques to control weeks and prepare beds for planting. Here a clear tarp heats the ground to kill weeds.

Soil structure refers to the size and arrangement of soil particles. That influences what kind of habitat is available for soil organisms, and in turn the soil’s capacity to absorb and hold everything from nutrients to water to greenhouse gasses. In general, the less soil is disturbed, the more complex the soil ecosystem becomes, supporting more plant and animal life and offering more of a buffer to fluctuating nutrients and moisture.

“We want our soil to be sponge-like,” Mead offers. “This year we’ve had a crazy drought. Some things are struggling, but I imagine it’d be much worse if not for our no-till practices. And in wet years, like last year and in 2018, our plants weren’t drowning in the fields because that spongy soil structure could hold more water. In 2018 a bunch of farms ended up buying produce from us because of that.”

Anecdotally, Mead and Drews are seeing that their practices cultivating healthy soil are leading to healthier plants. “The shelf life of our produce is really impressive,” says Drews, who has farmed elsewhere in the Valley and across the country. “And rarely needing to strip off yellowing leaves in the washhouse is another clue that I noticed immediately when coming to Astarte.” 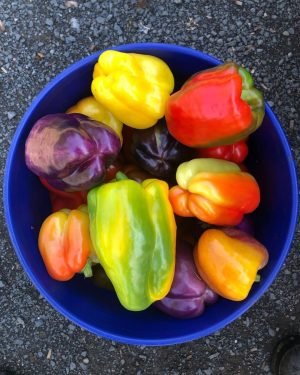 Mead adds, “we’re always wondering if our food has higher nutrient levels because of how we farm. We’d love to eventually test it, but just intuitively, our produce has really dark colors which suggest that.”

Today, despite the drought, their fields are bursting with crops from the peak of summer. “We just started seeing the first bush beans and pole beans,” says Mead. “We’re coming off zucchini and cucumbers, but we’ve got tons of tomatoes, eggplant, and peppers. And our garlic and shallots are harvested and curing.” Many of these are currently on shelves at the two River Valley Co-ops.

One crop Astarte Farm is known for growing is eclectic heirlooms tomatoes, many of which are ripening to their full, juicy goodness right now. “Heirlooms are genetically older varieties that have a lot of variation in shape, size and color,” explains Mead. They might not make sense for a larger farm to grow because yields might be lower, and their variation hinders standardization in how they’re cultivated.

Drews says they’re worth growing for the taste difference alone. “We’ve got a fun cherry tomato this year called Sunrise Bumble Bee, with a red, yellow, and green tie-dye pattern,” she adds. That one they learned about from Red Fire Farm, another giant in the local tomato scene. 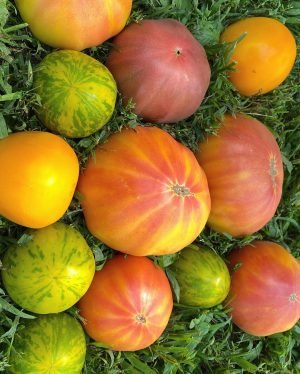 Both farmers are aware and appreciative of what they see as a unique farming culture in the Valley, where connectivity and mutual support are normalized. “Yeah, we’re all competing,” says Mead, “but it really doesn’t feel like that given all the ways we lean on each other.”

As Drews puts it, “People aren’t leading with their ego. There’s a lot of sharing tools and advice and asking questions.”

That’s been especially helpful as they experiment with no-till farming in a modern context.

“People have been farming without tilling for thousands of years,” Drews acknowledges. “It’s not like that know-how doesn’t exist. Adapting it to a commercial scale is our challenge. It’s just not what our society has invested in. We’ve pumped money into equipment and knowledge about tilling and conventional farming instead.”

Initially, guidance on commercial-scale no-till farming was hard to locate and not directly relevant to western Massachusetts. “But now there’s a critical mass of farms doing it here,” Mead says, “and those networks are strengthening.”

“We’ve gotten consulting help funded from American Farmland Trust,” she adds, “and been connected to other resources by organizations like NOFA Mass (the Massachusetts chapter of the Northeast Organic Farming Association) and CISA (Community Involved in Sustaining Agriculture).”

“Farming is hard enough. There’s no reason to feel like we’re going it alone.”

Jacob Nelson is Communications Coordinator for CISA. To learn more about local farms in your area and where to buy the food they grow, visit buylocalfood.org/find-it-locally.