“We live in a really interesting spot, where you can almost get all your food from within the region,” says Kelly Hickey, owner and general manager of Atlas Farm Store in South Deerfield. For those interested in putting more local food on their plate – even just for a special holiday meal – Atlas Farm Store is an ally.

Hickey describes the store as “kind of like a farmers’ market, but all in one place.” It began in 2012 as Atlas Farm’s stand, selling produce from their fields. Soon fresh fruit and veggies, meat, cheese, milk, and eggs from other local farms joined their shelves, then things like bread, flour, dry good, sweets, and ferments from farms and across New England were added. 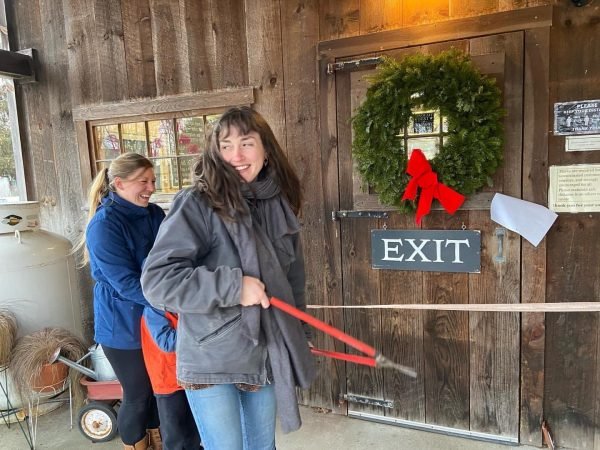 “The idea was to let the farm focus on growing food and let the store focus on its mission as a local marketplace,” she says. “I already had a good financial picture, put a business plan together, and though there were other options on the table, it was exciting to see staff rally around this possibility.”

“We’re still very close partners with the farm,” she adds. “We sell whatever they can grow and get daily fresh deliveries.”

Over time, the depth and variety of local food on their shelves has grown. It helps that many local farms specialize in certain crops, complementing each other rather than competing for market share. Salsa and specialty peppers from Kitchen Garden Farm in Sunderland, winter spinach from Queens Greens in Amherst, ginger and syrups from Old Friends Farm in Amherst, and melons from Riverland Farm in Sunderland are easy choices to carry.

When Valley-grown options aren’t available, working with local food distribution companies lets them extend their reach further into New England, all within a 200 mile radius. For example, they now sell several kinds of heirloom beans from a farm in Maine, delivered through Marty’s Local. Those are available in their new bulk dry goods section, soon to be joined by grains, seeds, and popcorn, all grown nearby. 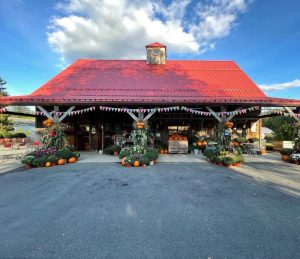 “It’s coming together slowly because a lot of these products are still curing right now after harvest,” says Hickey. “But it’ll be exciting to have a fully local and regional bulk section – something I haven’t seen before.” Selling in bulk will also make products comparatively cheaper for customers and reduce packaging – all things aligned with the store’s values.

Of Atlas Farm Store’s many values, supporting local agriculture is central. As an intermediary between customers and farms, “we keep a direct connection between people and where their food comes from, but take the burden of marketing off the businesses we buy from,” Hickey explains.

“We also try to buy from businesses with food justice in mind,” she adds. “Are they solar powered? Are they invested in animal welfare? Are they woman, LGBTQ, or immigrant owned?”

Staff wellbeing is another priority. So is food access and affordability for their customers. That’s where things sometimes get tricky.

“We’re really trying to strike that balance of paying farmers and producers well for what they’re giving us and passing on good prices to customers,” says Hickey. “Sometimes that leaves us in a pinch.” 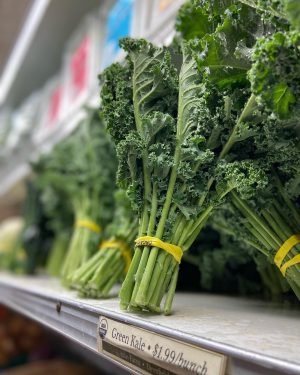 The fact that many farmers are meagerly compensated for their work and many Americans have slim food budgets are both systemic challenges, tangled up with commodity prices, job markets, affordable housing, and so on. Addressing this will take collective action. In the meantime, Atlas Farm Store does their best to bridge that gap between fair price and fair cost.

“We always try to prioritize making our produce accessible,” says Hickey. “Buying so much from Atlas Farm, we have a bit more control.”  When something is abundant, they put it on sale or offer deep discounts to folks who buy in bulk to store at home.

The store also has a “scratch and dent” section, where dinged up produce and day-old bread can be had at a markdown. Much of this is also donated.

“This food is still perfectly good, just not aesthetically pleasing,” says Hickey. “Working with great community partners like Stone Soup Cafe, the Food Bank of Western Mass, the Pioneer Valley Worker Center, Rachel’s Table, and others, we’re able to get it into people’s hands quickly.”

Accepting payment through SNAP and HIP (the Healthy Incentives Program) is also key. HIP is a Massachusetts program that automatically reimburses SNAP recipients for the local produce they buy at HIP vendors, up to $80 per month depending on household size. This boosts local farm sales and makes fresh produce available to many at no cost.

Their status as a HIP vendor was in flux when Hickey took over but is now confirmed. “CISA (Community Involved in Sustaining Agriculture) was really helpful in navigating the application process, and funding other legal counsel too,” Hickey shares. “A huge percentage of our sales come from SNAP and HIP customers now, which is awesome.” 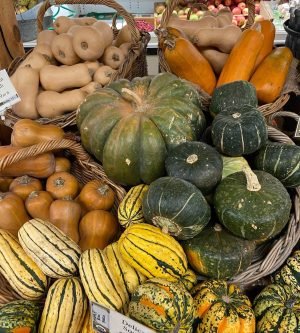 Being open year-round means Atlas Farm Store offers a consistent access point to local food for everyone. Even as snow arrives, their shelves are full of ingredients for holiday meals.

“There’s so much fresh local food available throughout the winter,” says Hickey. “Atlas Farm grows a lot of storage crops – potatoes, carrots, beets, cabbage. We’ll have squash and brussels sprouts for a while, and salad mix cut fresh every few days. We have apples from nearby, and of course cranberries. And local meat, dairy, eggs, and non-perishables never go out of season.”

Looking ahead, Hickey is excited to deepen relationships between the store and surrounding community. “We were able to do a few events again this year, including a Dinner in the Field with Bub’s Bar-B-Q from Sunderland,” she offers.

“We have an awesome community who wants to see us succeed in this new chapter,” says Hickey. “And we’re really fortunate to live in an area that’s producing so much great food, and really values its agricultural history and its place in agriculture today.”

“People want to support local, and that makes it possible for us to do what we do.”

Jacob Nelson is communications coordinator for CISA. To find other local stores, stands, and markets selling local ingredients for your next holiday meal, visit buylocalfood.org/find-it-locally.