Spring has sprung, with green grass and vibrant flowers bursting forth across the Valley and hilltowns. Some wild edibles, like nettles, garlic mustard, and fiddleheads, have already begun their season. Meanwhile on local farms, the first spring field crop is about to come into force.

“There’s some starting to poke up several inches right now, but we need warm weather in the mid-60s and 70s before they’ll really start to push,” says Dan Smiarowski of D. A. Smiarowski Farms in Sunderland.

He’s talking about asparagus, of course, a staple and celebrated crop in the Valley. Collectively, local farms don’t grow as much asparagus as they did before the Fusarium blight (also known as root rot) hit hard in the 1970s. But with disease-resistant varieties now in the ground, the harvest is still impressive.

D. A. Smiarowski Farms grows nearly 20 acres of asparagus, along with similar acreage of butternut squash and a few acres of pumpkins. “We’re a 175-acre farm, and we just turned 99 years old,” Smiarowski says. “My wife Penny and I manage things, and my brother Tom is a big help day-to-day. We all work off the farm as well.”

They’ve grown asparagus for a long time, but devoted more land and attention to it in the last 10 years, he says. Last weekend they planted another acre and a half – 15,000 new plants – which will raise their yearly production to over 35,000 pounds.

Next week, the harvest begins. “The season is usually May 1st to about Father’s Day,” Smiarowski explains. “It’s an early crop, which many farmers like because it brings in money right away to pay some bills for growing other things.”

Harvesting asparagus with speed and efficiency is a skill that takes some practice. The tool of choice is an asparagus knife. If you’ve never seen one, imagine a stout, two-foot-long barbecue skewer with a chisel-like blade on the end, always with a curved or V-shaped cutting tip. Harvesters deftly stab the blade into the ground at an angle next to a mature spear, severing it from the plant’s root crown just below the surface.

“Asparagus is fairly brittle,” explains Smiarowski. “If you jab it with a flat blade, it might snap with a jagged edge.” The notched blade cuts more gently but still needs to be wielded carefully, especially when aiming to cut just one mature spear out of a cluster of smaller ones. Cut asparagus is then piled into large totes and brought back to their packing building to be washed, banded, and sent on to customers. 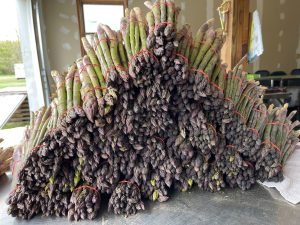 To accommodate their increased harvest, D. A. Smiarowski Farms is constructing a new processing building – a simple idea made complex by permissions and financing they need to secure. Smiarowski is glad they now have permits in hand, and with support from Community Involved in Sustaining Agriculture (CISA) were just awarded a Food Security Infrastructure Grant to cover some materials costs.

Food Security Infrastructure Grants are a state program created in response to the food supply challenges brought to light by the pandemic. Since 2020, they’ve given farmers and small business owners funding for over 500 projects that address weak links in local food supply chains. Increasing supply chain resilience by adding storage, processing, transport, and sales capacity creates more reliable access to local food for everyone. It also makes it easier for these small businesses to expand sales locally, feeding their neighbors. 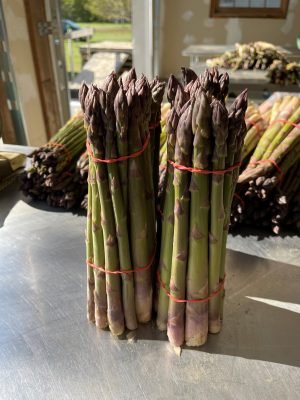 Most asparagus from D. A. Smiarowski Farms feeds their neighbors by way of local grocery stores like the River Valley Co-op stores in Northampton and Easthampton, Randall’s Farm in Ludlow, and Whole Foods in Hadley. “We sell here and there to restaurants too,” Smiarowski says. “Less so with their challenges during the pandemic, but hopefully that picks up.”

By mid-June new asparagus shoots become much thinner, signaling a stop to the harvest so that plants can recharge for next year. “We let them go to fern, and some will grow over 6 feet tall,” Smiarowski says. “In fall the frost makes them all die back. In spring we mow the dead ferns, then disc (a form of tilling that disrupts weed growth in the topsoil) and fertilize the fields for the upcoming season.”

Asparagus grows so well in the Valley because of the soil and the expertise that generations of farmers have accrued and passed down. D. A. Smiarowski Farms benefits from both. “Our farm is right on the river, and our soil is mostly Hadley silt-loam,” Smiarowski says. “Asparagus loves that lighter soil. The water needs to drain well, otherwise it can suffocate the crowns.” 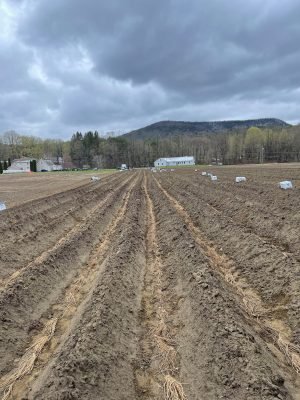 Planting new asparagus as roots – called “crowns” – at D. A. Smiarowski Farms in 2022

“Healthy crowns last 20, 25 years if you take care of them well,” he continues. After that, production naturally declines and it’s time to remove them, resting the field or planting a different crop that won’t exhaust the soil of the same nutrients. Butternut squash and pumpkins pair well in rotation with asparagus because they like a similar light soil.

Smiarowski’s family is a wealth of asparagus farming knowledge in their own right. He also says there’s a good culture of collaboration between asparagus farms, buoyed by strong consumer demand for the crop that removes some pressure to compete.

“I work closely with a couple other growers, sharing ideas,” he explains. “The late Wallace Hibbard, who I feel was the godfather of asparagus in the Valley, was a wealth of knowledge before he passed away.” Smiarowski shares Hibbard’s philosophy of passing that knowledge forward.

Recipes for enjoying asparagus have been passed down too. “I always go to my mom’s recipe,” Smiarowski says. “You cut it into pieces and steam them in a frying pan to soften up a little bit, then add olive oil and fry it up. Add a little butter and parmesan cheese and you’re good to go.”

Finding locally-grown asparagus on sale near you is a breeze. Just check out CISA’s online guide to local food and farms.