Meghan Hastings has a secret to share about sweet corn. “The variety really doesn’t matter,” she says. “What makes corn taste great is that it’s picked fresh every single day.” At Dave’s Natural Garden, that’s what she and her partner Dave Kaskeski do for their farm store in Granby. 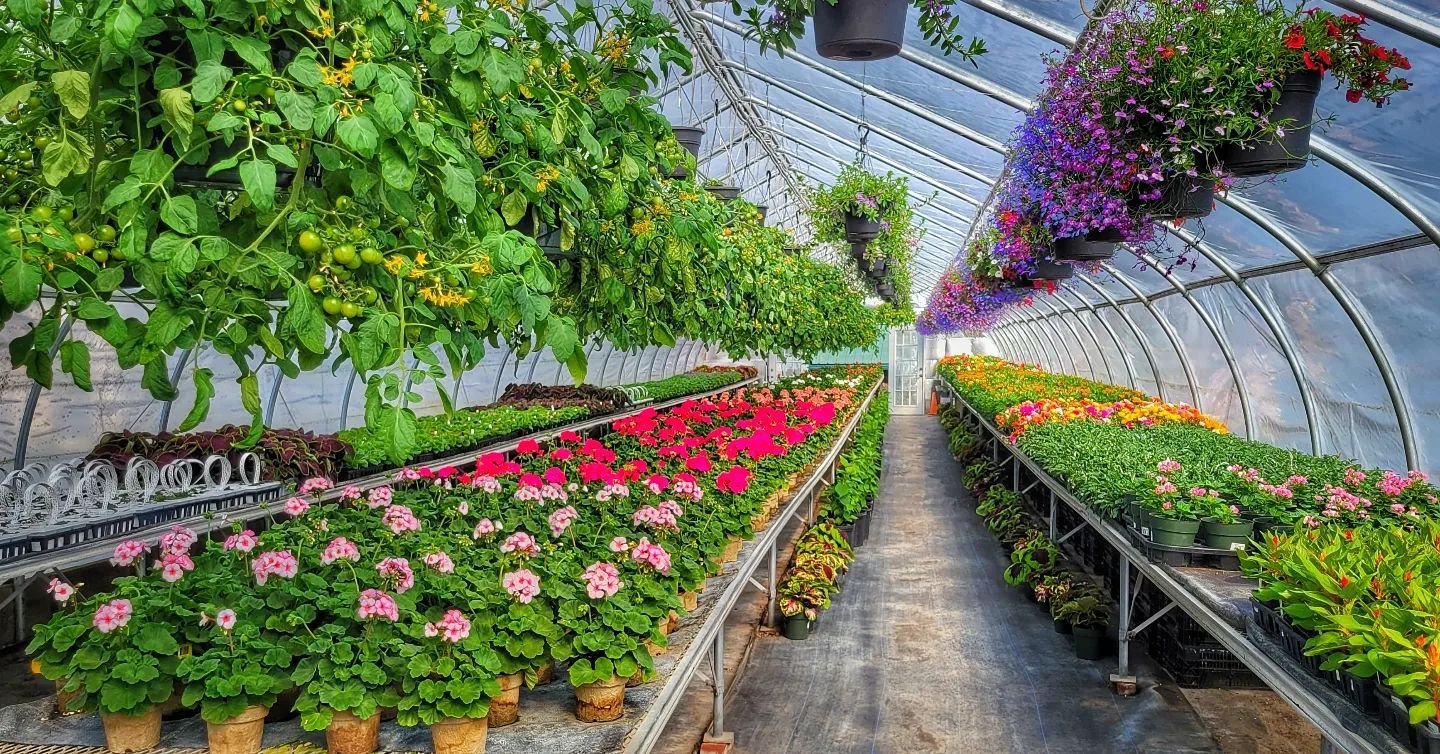 Dave’s Natural Garden is a small, diversified farm and greenhouse that Kaskeski founded 20 years ago. Mostly they grow plants, with the business split between growing ornamental and vegetable starts for farmers and gardeners each spring and farming nearly 7 acres of fields and greenhouses themselves using organic practices. They raise some poultry for eggs and meat too.

At their farm store, open year-round at 35 Amherst Street, “pretty much everything we sell is local,” says Hastings. A lot comes straight from their farm, where something is ripe for eating most days of the year. The balance – veggies, fruit, meat, cheese, staples, and sweet treats – they source mostly from other producers in the Valley or else in Massachusetts where possible.

“The two things we are probably most known for are hanging flower baskets (a popular spring item) and corn,” she says. “And it’s interesting, the corn thing, because we actually don’t grow it here.” 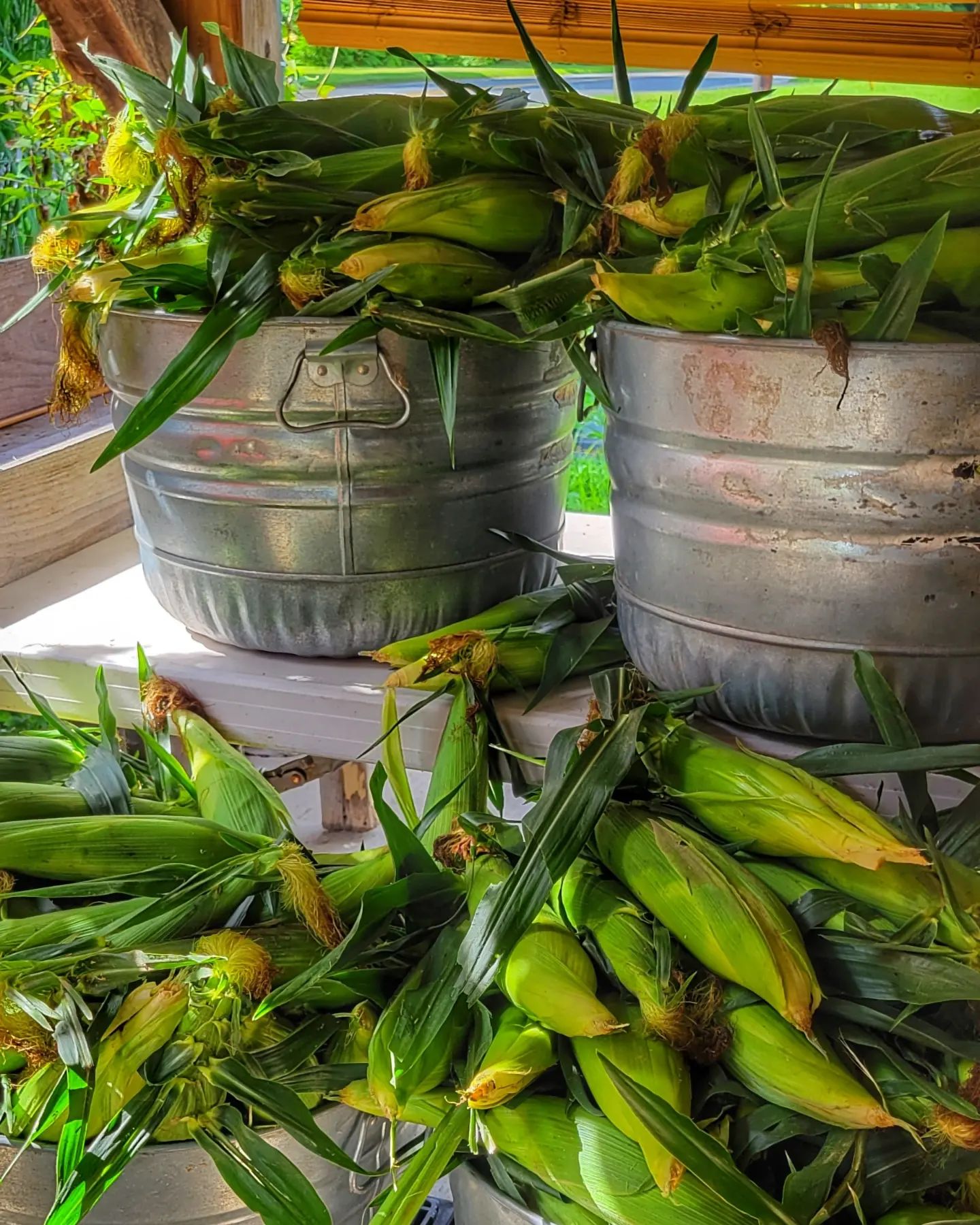 Hastings explains how the arraignment stems from Kaskeski’s first job as a teenager picking corn for Henry Ziomek in Hadley. “He just never stopped. Even after he started this business, he’d still pick corn there in the mornings before coming here up until Henry passed away.” At that point an agreement was made to keep planting corn on that land, and Kaskeski and his staff would tend and harvest it for Dave’s Natural Garden. “We call it our corn co-op,” says Hastings, and the agreement seems to work well for everyone – especially local corn lovers.

“We’re starting to be known for our garlic too,” she says, speaking as she works cleaning the nearly 18,000 heads of garlic they harvested last week.  Another story of mutual support: “we had 6 boys from the Granby boy’s lacrosse team – one of them my son – help us harvest, and we’ll donate to their uniform fundraiser.” Most of it will be sold for eating or for planting next fall, but they also make some black or fermented garlic too.

This year they hope to actually harvest most of the interesting crops they planted. Last year, as Hastings puts it, “we got taken for a ride – a very wet boat ride.” 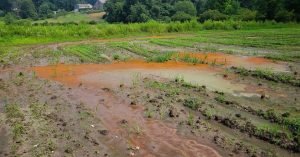 The summer of 2021 was the wettest on record for much of western Massachusetts. According to the National Weather Service, some areas got over 12 inches of rain in July alone – more than twice the average in many cases. “Our soil doesn’t drain well,” says Hastings, “so when we get that much rain so quickly, that’s real bad. In the end, we lost about 90% of our crops in the field.”

This time a year ago, all they could do was react to the situation with ingenuity. “We started planting things in bulb crates in our greenhouses, and by late August were able to harvest some late-season tomatoes, cucumbers, greens, and even some radishes,” says Hastings. “But in the meantime, we needed to stock the store from somewhere, so we leaned on other farmers. Four Rex Farm in Hadley sold us melons. Bardwell Farm in Hatfield had lettuce. Plainville Farm in Hadley had a lot of things.”

“That’s one of the nice things about farmers around here,” she says. “You compete sometimes but you can still be friends. Last year our friends were lifesavers.”

Now they’re redoubling efforts to prepare their farm for the future. This region is projected to experience increasing rainfall, greater weather variability, and more frequent and intense extreme storms as the impacts of climate change accelerate. Hastings is one of many farmers who see adaptation as necessary. “Welcome to the new New England,” she says. 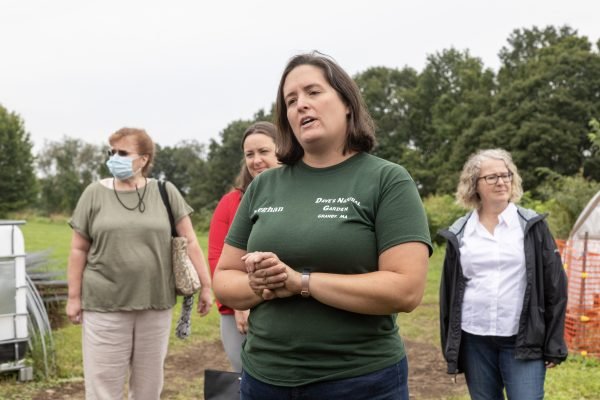 Adaptation is also urgent because the farm would struggle to survive two bad years in a row. Dave’s Natural Garden was one of 7 farms impacted by last year’s rains that received a zero-interest Emergency Farm Fund loan administered by Community Involved in Sustaining Agriculture (CISA), a nonprofit that seeks to strengthen the local food economy. “That moved us back towards even footing,” she says, “but if something happened again this year, a disaster loan wouldn’t be enough.”

What does adaptation look like at Dave’s Natural Garden? “The biggest thing we need to do is control moisture,” says Hastings. “For us, that means growing more in greenhouses and reducing how much we till our fields.”

“Transitioning towards no-till means will help us treat the soil in a way that will drain better,” she explains. In general, less tillage allows creatures living in the soil to better aerate the soil and increase soil organic matter. Both things help the soil absorb more water and hold it longer, which is beneficial in wet and dry years. 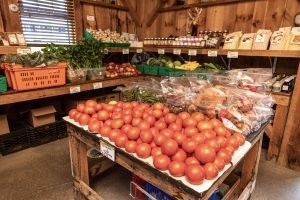 Growing in greenhouses gives them more control over rain and dew hitting plants and infiltrating the soil. They also extend the growing season for many crops, giving them more chances to replant a crop if it fails and diversifying what’s available in the farm store throughout the year. That’s good for their business and their customers, who, for example, can often buy tomatoes from Dave’s Natural Garden from April through December.

There are many organizations farmers can turn to for technical assistance and funding as they adapt to climate change. “CISA even has a Climate Program Coordinator focused on helping farms with that,” shares Hastings. “He helped connect me to others and get a grant from the Lookout Foundation to cover some of this work.” They’ve also received grants from the Grinspoon Foundation and American Farmland Trust to buy equipment for experimenting with no-till and funding from the Natural Resource Conservation Service for another high tunnel greenhouse.

Today, the US Department of Agriculture lists most of western Massachusetts in a moderate drought. That’s a stress on many local farms, but “you don’t have to worry about us,” says Hastings with a wry smile. “We’ll probably do fine.” Their farm store is full of fresh summer veggies from the field, locally raised meat, and other treats waiting to fill plates at the dinner table or barbecue. It’s open year-round, currently from 9-6 Monday through Saturday and 9-5 on Sundays.

Jacob Nelson is communications coordinator for CISA. To learn more about local farms and where to find fresh, in-season local food near you, visit buylocalfood.org/find-it-locally.