Editor’s note: This is the first of a two-part series about farm succession in the Pioneer Valley through the lens of McKinstry’s Market Garden. A second part will appear next Saturday, Sept. 18.

Farming for generations: McKinstry’s Market Garden is laying the groundwork for family succession, an important tool that can help ensure the future of farming and food in the Valley

Nothing in farming remains constant for long. But for McKinstry’s Market Garden in Chicopee, the changes over the past year and a half have been profound as they move into a new era.

While navigating COVID, they built a new flagship farm stand in the heart of the city, reopening in May. Behind the scenes, the gears began turning on another major shake-up, as the elder generation, parents Bill and Nicole McKinstry, prepare to transfer the farm and business to their sons, Will, 22, and Warren, 21.

At some point all farmers face a question of legacy. Will the business continue? Will the land remain in farming? How these questions are answered mean a lot to any one farm. Applied to all farms across the region, the answers shape our landscapes and write the future of farming and local food in the Valley.

The story of McKinstry’s Market Garden sheds light on what the process of farm succession can be like, and what it means to the people involved.

The McKinstry family has been farming vegetables in Chicopee for more than 100 years and four generations. 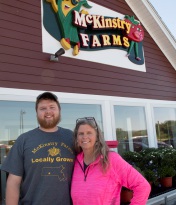 “Our great-grandfather started selling them on his milk route,” Will says. “Since then, that’s been the farm’s focus.”

Beyond the 30 acres at their farm store on Montgomery Street, they also own and farm 60 acres each in Granby and Hadley, and rent more besides.

For many, McKinstry’s is synonymous with sweet corn. They grow dozens of varieties, with something usually ripe from July 4 through early fall. Their own retail store is their biggest sales outlet. Recent renovations expanded their footprint and operating season, meaning they can sell more produce from their own fields, along with other local food.

Will and Warren grew up in the family business. Says Will, “I’ve been farming ever since I could remember, going to work with my grandfather every day I had off from school in the summer.” Warren spent more time working in the store managed by his mother, Nicole.

In some ways it seemed inevitable that the younger McKinstrys would take the reins, but for Bill and Nicole, it recently became time to formalize it.

Says Bill, “I’m only 58, but I don’t want to wait too long. They know how to work, and they’re both done with school for now. If we didn’t keep them involved on the farm, they might go looking for different jobs. So that’s why the transition was now.”

The change will be gradual, and formal papers are not yet drawn up. As Will explains, “So far it’s just been the additions of responsibility,” as he takes over the lead from his father on managing crops in the field, and Warren steps into a bigger role for retail.

Still, Bill and Nicole are including their children in decision-making more and more, “because they already do so much of the work,” Bill says. Soon, they will transfer part ownership of the business to the boys, though the land will remain in their name for now.

Comparing his experience, Bill notes, “I was probably around their age when my parents and I formed a three-way partnership.” And as in his case, he expects ownership to keep shifting toward his kids as they grow into expanding roles.

In planning for a smooth farm succession, the McKinstrys have a lot going for them. They have eager successors, they’re planning proactively, and when it comes to the future of their farmland, they have flexibility.

None of these are givens for other farm families, says Jae Silverman, a field agent with Land for Good, an organization that helps farmers across New England find farmland, keep tenure and plan for farm succession.

Just by knowing who’s next in line, the McKinstrys have a leg up, Silverman says.

“With Massachusetts farmers, I’d say it’s fairly split between those who have someone identified to take over — often related but sometimes not — and those who haven’t,” Silverman says.

And when the time comes for many farmers, retirement is a matter of degrees. They might still farm or live on the land — they’re just no longer principal owners.

Regardless of circumstance, clear communication and aligning all parties’ goals are crucial for a graceful farm transfer. When Silverman works with clients at Land for Good, “we help people figure out their vision for the farm, getting all that out verbally and written down. Then we can help them figure out the mechanics.”

Farms need not go it alone. Land for Good is just one of a network of local organizations built to help farmers navigate complex issues — everything from farm succession to food safety compliance or human resources questions. Community Involved in Sustaining Agriculture (CISA) helps farms with all of these, and they and others often have funding available to offset the cost of this assistance.

With the McKinstry family, “The fact that they’re actively having conversations about it as a family is so important,” Silverman says, noting that unfortunate situations can arise from silence and assumptions, especially within a family. “But when a senior farmer has been in the younger generation’s shoes (like Bill McKinstry), they can use their experience of succession as a model for what to do, or what not to do again.”

Different from most businesses, decisions made during farm succession heavily influence the future use of land in the region. The McKinstry family owns around 150 acres, none of it under conservation easements. With easements, the land’s development rights are sold, be it to a land trust or the state, and land use is then restricted to agriculture while the farm gets an infusion of cash and often lower tax rates.

“Conservation easements are an incredibly important tool for preserving farmland and facilitating farm succession,” Silverman says. But the financial boost is “a trick you can only use once.”

In McKinstry’s case, Bill is glad their land is free of restrictions. “We were fortunate that we didn’t have to sell our development rights, when other farms, particularly dairies around here, had to for survival,” he says.

The business can evolve more freely, and if Will and Warren decide to preserve land, that option is always there.

The logistics of farm succession might be mundane, but a lot hangs in the balance: Jobs. Land. Local food security. And ultimately a way of life and culture, both for the farmers that grow food and for the region’s identity, rooted in agriculture.

What does it feel like to consider these implications as someone passing on a farm, or someone taking over? Next week, both generations of McKinstrys share their views.