Valley Bounty: the Old Creamery Co-op – come for the local products, stay for the hang

What does the Old Creamery Co-op in Cummington have in common with Preservation Hall, a celebrated jazz venue in New Orleans? More than you might think.

They’re both social institutions in their respective towns, livening old buildings steeped in history. They’re both important meeting places of people and culture. And they’ve both been managed at different times by Lloyd Miller, current general manager at the Old Creamery Co-op.

Admittedly, the parallels end shortly thereafter. But the comparison proves an important point for many Hilltown residents and out-of-towners who frequent this Cummington landmark presiding over the site of an old dairy cooperative. More than a grocery store, it’s a hub in the local food economy and a social watering hole too. With plans to revamp their outdoor gathering space, they’re making sure they can still be a safe and inviting venue, even in the time of COVID. 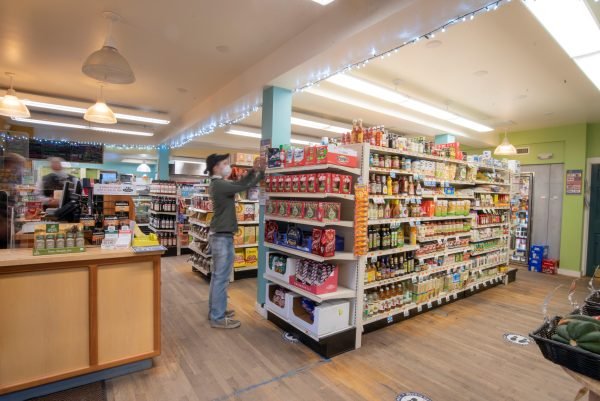 Across New England, small town grocers and general stores have long been junctures for commerce and conversation, often built at literal crossroads. Yet today, as society has become more mobile, the landscape of where people shop has shifted, in many cases to the outskirts of towns where specialty stores and supermarkets dominate shopping plazas. The impacts of this change are both significant and complex, but one thing is for certain: in most communities, small town grocery stores have faded as the gravitational center of town.

Most communities, that is, but not all. That’s what makes businesses like the Old Creamery Co-op and other locally-minded stores stand out. They still attract farmers and makers looking to sell their products, people looking to buy them, and anyone hoping to engage with their neighbors and hear the day’s news.

Today, “the Old Creamery Co-op has a dual mission,” says Miller. “First and foremost, we’re a full-service grocery store, providing high quality and, in many cases, organic and locally-sourced products, from produce to meat, dairy, and even soap,” says Miller. “We have all your basics, prepared foods, a deli counter, and even a walk-up ice cream window.” 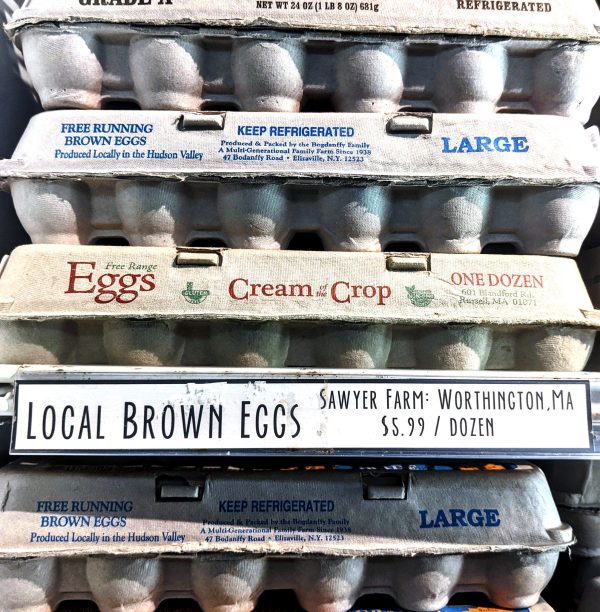 They aim to remain an affordable option for nearby residents, who have few other options for groceries nearby. “We’re also a stopover on the Route 9 between Pittsfield and Northampton,” explains Miller, “so especially in the summer, we get a wonderful bump from tourists and locals too out enjoying the area.”

Many items on the shelves come from farms in the Hilltowns or the Valley. “We have a great relationship with Sawyer Farm in Worthington,” says Miller. “They have such a broad range of produce as well as eggs. And we have a really wide variety of small local producers who sell to us throughout the year too.”

The secondary mission of the Old Creamery Co-op, facilitating community gathering, was always tied closely to their indoor café space. With a coffee shop atmosphere, it was a place for friends and groups to meet, and art and music to be shared. A “third space” that wasn’t work or home but felt like home to many. Yet since the onset of the pandemic, the indoor cafe spaces has remained closed to gathering, and Miller says it will likely stay that way until COVID fades further into the background. Instead, like many in the food service industry, “we’re doing our best to recreate that space outside,” he says. 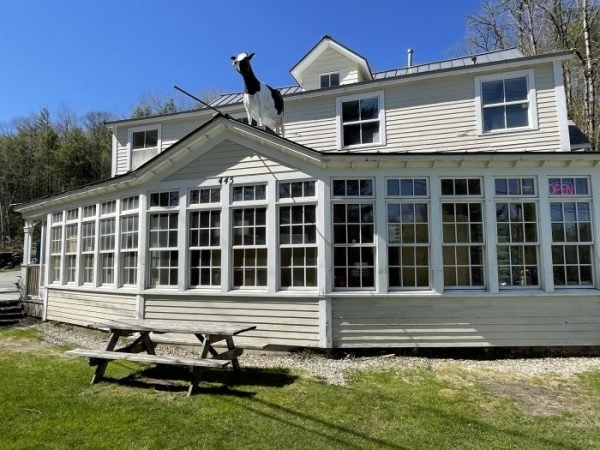 The current front of the Old Creamery Co-op in Cummington, graced by Camille the cow, will soon be revamped to encourage outdoor gathering (PC Jesse Massaro)

Their vision is simple but transformational, aiming to create an invitation to gather in their front yard. “We want to put in a split rail fence, so customers feel safe and comfortable separated from the road,” says Miller. “Add a few new picnic tables, a new awning, and then leave a large area open as a play space for kids, where parents don’t have to worry about them running off into the street.”

Miller has a lot of experience with arranging things and coordinating people to bring new life to an older space. Prior to moving to the area in 2020 with his family, he visited Cummington often but lived in New Orleans. There he worked his way from bartender to bar manager, working with jazz legends at the aforementioned Preservation Hall, and opened his own farm-to-table burger bar, among other things. The throughline for him is creating opportunities for his neighbors to enjoy where they are.

“To me, it’s not worth doing if it’s not mission-based, and everything is about community,” he says. “The best we can do in this world is live by example, and work for the people who surround us.” 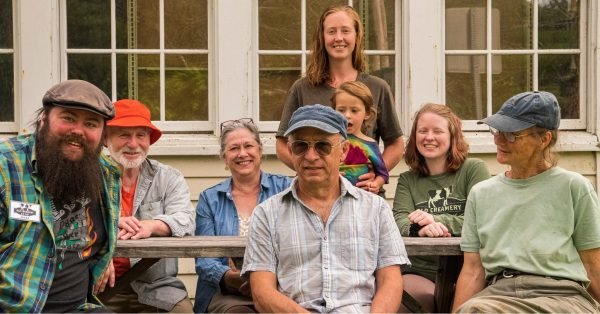 Much of his experience translates well to managing the Old Creamery Co-op. There’s also a lot to learn. “The retail grocery business in general has an operational model with a 1% profit margin,” he explains. “For every $100 worth of product we sell, we get to keep $1. That requires a lot of attention to detail to not lose that 1%. But as a mission-driven business, our goal really isn’t to make money either. If we’re turning a big profit, we’re doing it wrong.”

As such, they don’t have much money set aside for capital improvements like what they have planned. Instead, they worked with Community Involved in Sustaining Agriculture (CISA) to secure a grant through the Massachusetts Growth Capital Corporation, and crowdfunded matching donations from the community. The donation period for that campaign closed yesterday, the 22nd. As of this writing, they had nearly reached their goal of $12,686 thanks to over 100 donors.

“People driving by only have a few seconds to get an impression of the place,” says Miller. “When they see people playing and enjoying the area out front, it communicates what this place is – it’s more than just a grocery store.”

Jacob Nelson is communications coordinator for CISA. To learn more about local farms, stores, markets, stands, and other places to buy local food near you, visit buylocalfood.org/find-it-locally.