A farmer and a carpenter walk into Shelburne Farm and Garden. They get to know the owner, take stock of the inventory and records, do some deep thinking and soul searching, and they buy it.

In late March, Maria Topitzer, who also runs Lyonsville Farm in Buckland, and her partner Justin Lively, who runs Heathan Carpentry in Shelburne Falls, bought the well-known local business from previous owner Patricia Schmidt. Schmidt had managed the store, which sells farm, garden, landscape, livestock, and pet supplies, since 1991. Last year she made the difficult choice to move on, influenced by supply and labor shortages and a desire to part on her own terms. 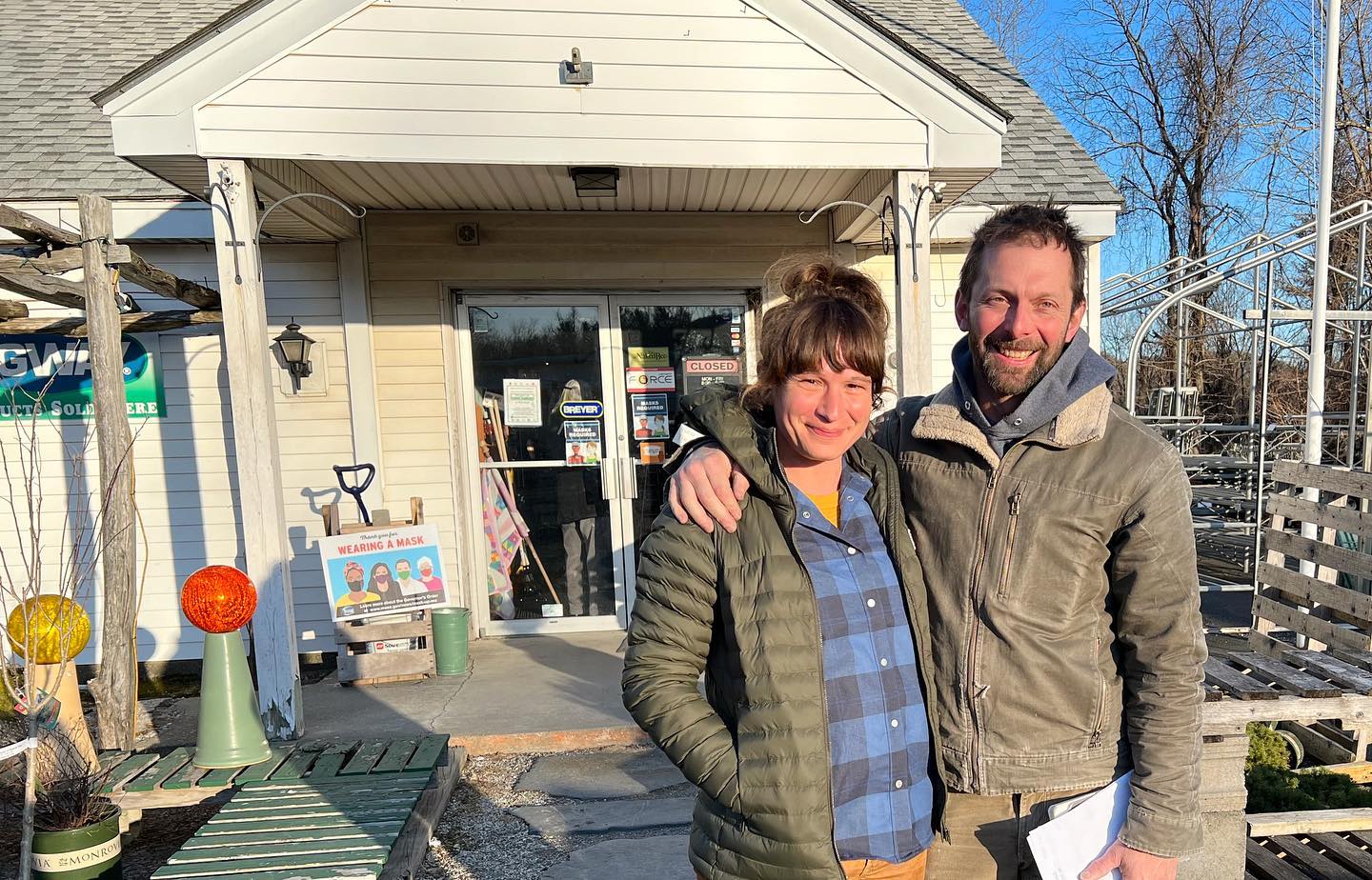 Topitzer and Lively’s path towards ownership started as a dream, which quickly turned serious as they realized how suited they were for the opportunity. “Justin and I both grew up in the area and know the community,” says Topitzer, “and as a farmer, I know what people need from a store like this. You really need growing experience to run the place – without it you’d be lost.” Lively brings a similar perspective as a carpenter. All told, “we just felt like all the businesses would be good for each other,” she explains.

Topitzer sees the garden center as a natural companion to Lyonsville Farm, especially as the consistent retail outlet she’s long been seeking. Right now, Topitzer farms on three acres leased from The Atherton Farm, growing a bounty of veggies, herbs, plant starts, and flowers in open air and in four greenhouses that allow her to produce year-round. Two of these greenhouses, as well as other farming and processing equipment, were purchased with funds from the Food Security Infrastructure Grant (FSIG) program. This program was initially created by the state to give farmers and small business owners more resources on the ground to increase production of local food and the resilience of local food supply chains.

Lyonsville Farm’s proposals were funded in all three rounds of FSIG distributions in 2020 and 2021, allowing Topitzer to grow more and more food. That’s great for her farm business and for local eaters. It also meant she needed new ways to get that food to market.

“I sell at the Greenfield Farmers’ Market, I have my CSA, and I sell some wholesale,” she says, “but those avenues haven’t been quite enough. And I can’t sell from the property I lease.” Now with Shelburne Farm and Garden, Topitzer has a retail location to sell Lyonsville Farm food and plants all year.

As much sense as it made on paper, the decision to buy was still a big leap. “It was a bit scary, and we knew it would be a lot of work,” Topitzer says. Though already accomplished small business owners, she and Lively are still neck deep in learning the world of retail. “Setting up accounts with new vendors, ordering, stocking, dealing with COVID-19 supply issues from a retail store perspective – it’s all so new,” she says.

As they find their footing, they’re grateful for the outpouring of community support they’ve received, especially the backing of Schmidt throughout the transition. “Patricia has been amazing. I shadowed her for a few weeks, and now I ask her questions daily and she’s so responsive. She’s been so kind to us. We could not have done this without her.”

As longtime locals, Topitzer and Lively were aware how much people rely on Shelburne Farm and Garden as one of the few pet, farm, and garden suppliers in the area. “This store is so important to the community,” Topitzer says, “and we felt strongly that it should continue.”

Though they have changes in mind, they will mostly be additions, not subtractions. “The previous owner, Patricia, built the store around what people needed, down to their favorite brands of dog food,” she explains. “We want to reassure people that we’ll continue to stock what she did – what they’re used to finding won’t disappear.”

But like a kid now in charge of the candy store, Topitzer is excited to offer new things she wishes local stores had always carried. “I want to add more supplies for vegetable farmers like me, more organic products that I like, and more quality tools,” she says. “And we’re going to build a retail greenhouse to sell plants year-round. I love houseplants, so I’m thrilled.”

One thing about running a farm and a garden center: busy season is the same for both. As spring heats up, Topitzer says she and Lively have been running back and forth to keep everything firing on all cylinders. Their labor is already bearing fruit, as Shelburne Farm and Garden shoppers can now find plenty of Lyonsville Farm starts and a cooler full of fresh-picked greenhouse produce in the store.

“We have lots of spinach, lettuce mix, bok choy, hakurei turnips, radishes, arugula, beets, kale, and chard,” says Topitzer. Last week the first overachieving greenhouse tomato ripened to a deep red. Give it a month, she says, and more of those will be available too. For now, it’s a teaser of great things to come.

Shelburne Farm and Garden is now open Monday through Friday 8 – 6, Saturdays 9 – 5, and Sundays 10 – 4. To learn more about them and other locally-minded greenhouses and garden centers throughout the Valley and Hilltowns, visit buylocalfood.org/find-it-locally.