Supporting local farms might involve choosing to eat local, but what about dressing local? After all, farms grow more than food.

Choosing locally grown fiber and fabrics benefits local farmers, business owners, and landscapes, and can achieve many of the same social and environmental benefits as choosing local food. Yet the support and rhetoric behind a movement for local fiber isn’t as well established – yet. Marti Ferguson of Walking Cloud Farm in Buckland has thoughts on how that can change.

Ferguson was born in New England, spending several years in Minnesota before returning to western Massachusetts. After a career in the medical world alongside other farming projects, she and her husband bought 9 acres in Buckland, and she welcomed her first sheep to the land in 2016. “I wanted to do something entirely my own,” she says, “where I could call the shots.” 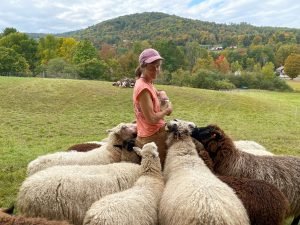 Sheep are the heartbeat of the farm and co-stewards of Ferguson’s rolling hills. “I’m running a flock of purebred Finnsheep,” she explains, “a dual-purpose breed used for meat and fiber. Right now I have 22 animals, but come lambing season we might have more than 50.”

Ferguson grazes the flock on the land around their home and at a second parcel nearby. In both locations, she and the sheep are rebuilding the land’s fertility through a strategy called rotational grazing. Constraining their access to small sections of pasture at a time encourages the sheep to mow down everything rather than being picky. Over time, this encourages quick-growing grasses that sheep like best to take over, fertilized by regular additions of manure.

“It’s like magic,” Ferguson says. “When livestock work the land like this, the land improves and adapts for the livestock. Done right it’s such a beautiful relationship. My sheep aren’t pets, but they’re also not just products. We’re collaborators.”

Ferguson is motivated by the puzzle of making it all work – balancing the needs of her flock and land and juggling the many tasks of being a small farm owner. “There’s lots of challenges,” she says. “They’re really interesting to learn about and test – it’s humbling and exciting at the same time.”

Moving back to western Massachusetts, Ferguson was pleasantly surprised to find a welcoming community of fiber farmers and enthusiasts. “If you scratch the surface, every single hilltown has a couple of fiber groups, and people came out of the woodwork offering support,” she says. “One of the first things I did was take an all-day workshop with Jill and Jim Horton-Lyons at Winterberry Farm in Colrain about all things sheep, and they’ve been mentors and friends since.” 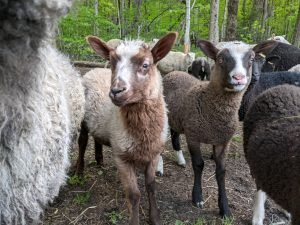 Ferguson also points out the unique number of resources available locally to animal and fiber farms. “The Mass Sheep and Woolcraft Fair happens every year just 20 minutes away in Cummington,” she says. “We have Community Involved in Sustaining Agriculture (CISA) promoting local farms. We have a fantastic source for farming supplies with the Greenfield Farmers Cooperative Exchange. And many sheep farmers across the country can’t get a large animal vet, but we have one right here in Buckland.”

It may seem like the foundation to produce more fiber and textiles locally is set. But still, something is missing. “There’s this wonderful web of informal connections,” says Ferguson, “but it’s not doing the heavy lifting to build the public awareness and local infrastructure that could support a bigger local fiber economy.”

On the infrastructure side, “farmers like me just need affordable local places to clean and process raw wool,” she says. “So much wool gets composted because there’s no time or money to send it far away for that.”

Meanwhile, awareness of the global textile industry’s impacts and the benefits of local alternatives pales in comparison to other things we consume, like food. “We get dressed every day just like we eat every day,” Ferguson reminds. “But we’re very unthinking about those choices.”

Today, “so much of our fabric is made with fossil fuel-based synthetic fibers and harsh chemicals, and end up shedding microplastics,” says Ferguson. “Then there’s social justice implications – who is making all these things, where, in what conditions, and for what pay?”

The global food and fiber economies are shaped by wildly different factors, so any re-localization would look different for each. But for building awareness about local fiber, Ferguson looks to the local food movement as a model. “There’s a great deal of support for the local food economy out here,” she says. “We need to have local fiber recognized in the same way.”

Two groups already working on this are CISA – which promotes all local farm products, and recently held a networking event specifically for local fiber farmers and processors – and Western Mass Fibershed.

“Fibershed is a national organization with many local chapters,” explains Ferguson. “Their focus is to raise awareness among everyone and connect producers – whether it’s fiber farmers, weavers, designers – to find opportunities to grow this economy.”

And while working towards change, local farmers still need to earn enough to keep the lights on. “My fleeces – I’m going to keep selling them mostly to artists and hand-spinners,” she says, “because that’s where the premium is.” 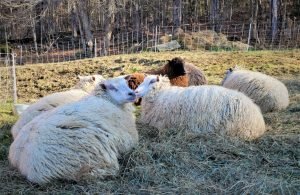 Ferguson acknowledges that all these issues are complex. “I can’t fault anyone for not having the time to learn about them,” she says. “Plus, there are real economic barriers to affording local fiber, and the current system is convenient.”

Walking Cloud Farm sells their fiber products straight off the farm, including fleeces, washed locks, roving (straightened coils often used for spinning), and now yarn. They also sell sheep for pets or breeding stock, sheepskin pelts, cuts of lamb, and eggs. Ferguson also plans to be a vendor at the Massachusetts Sheep and Woolcraft Fair, scheduled for Memorial Day weekend at the Cummington Fairgrounds.

For those who want to help the local fiber economy grow, supporting groups like those mentioned above is one tactic. Another, if affordable, is to buy things made with local fiber. That isn’t just an investment in quality clothing and fabric, says Ferguson. Supporting these local farms now is an investment in the grander vision of local fiber too.

Jacob Nelson is communications coordinator for Community Involved in Sustaining Agriculture (CISA). To learn more about local fiber farms and artisans near you, visit buylocalfood.org/find-it-locally.