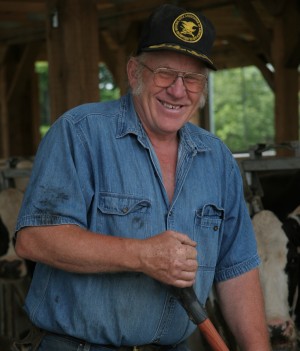 Warren Facey’s grandfather was raised on a farm on Barton Road in Greenfield. Growing up nearby, Warren watched his grandfather farm the land. In 1949, his great uncle sold that land, and Warren watched as houses were built all over it. “That,” he says, “is how I became a conservationist.”

As a young man Warren worked in construction, but found himself drawn to land and livestock. He bought a couple of cows to milk, then in 1972 he and his wife Sandie bought a small farm in Leyden. When he was laid off the following year, Warren “bought a bunch of heifers and built a milk house.” Within a few months, dairy farming became his full time occupation.

From the beginning, Warren was an activist farmer. He was always interested in the big picture and willing to invest time and energy to improve profitability and quality of life for farmers. Warren and Sandie were early members of CISA’s Dairy Action Group, which provided training, networking, and planning opportunities.

In 1998 members of this group created the Our Family Farms marketing cooperative and began selling milk directly to Pioneer Valley residents. The new business had no money to advertise so the farmers focused on marketing they could do themselves, such as giving away free samples and giving consumers a chance to meet their cows. They promoted two key attributes of their product: the milk came from local farms and the cows were not treated with the hormone rBGH.

The launch of Our Family Farms came at a critical time in CISA’s early development. Consumers responded enthusiastically to the local branding of milk, helping demonstrate to CISA and its partners and funders that a ‘buy local’ campaign would be well received in the Valley.

These days, Bree-Z-Knoll Farm milks 170 cows twice a day. Warren’s son Randy and his wife Angie run the farm, with help from the third generation. The farm has preserved much of its 350 acres for agricultural use, most recently as part of a large land protection deal supported by the state’s new Landscape Partnership Program and two of the land trusts also winning Local Hero awards this year. Warren recently retired from 19 years of service to CISA on the board and earlier governing committees.

If you call Warren at home and no one is there to answer, you’ll hear his friendly voice say: “Hi, you’ve reached Bree-Z-Knoll Farm where we’re outstanding in our field.” We at CISA wholeheartedly agree, and we’re proud to honor Warren Facey as a Local Hero.